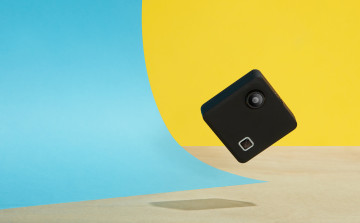 It’s not enough to have a good camera these days. You have to have a solution to life. Drift Innovation hasn’t announced a new camera in quite sometime. Originally known for having a durable camera with beefy battery life and above par image quality, Drift has taken a different approach to yearly innovations. In the past, Drift’s approach to it’s audience has always focused on creating a camera with a specific set of purposes. Instead of yearly iterations on the same design, Drift seemed more set on creating a camera for a new user base, and with a new set features each time around. Creating one of the few Action Camera markets were a customer base could buy into without fear of it becoming obsolete in 9-12 months. The Drift COMPASS sets out to capture and guide the way you film your life.

The COMPASS is a small flat square camera designed almost to be worn as a fashion accessory instead of a like a traditional action camera. It will feature 1080p/720p footage, 8Mp camera, 5 hour internal battery life, pair with a smartphone app for live streaming, and one of the first cameras I can think of to offer cloud storage.

I’m just a bit worried with this direction though. So many people use their cell phones to capture life and use their GoPro to capture the action. I’m worried this is marketed to an audience that already has a better product. It is a considerably cheaper and less risky investment than a cell phone with a expensive contract but the ease of capturing and sharing on your phone is already so convenient. Considering we’ll need a phone to take advantage of the COMPASS, I’m a little skeptical but I said the same about the GoPro LCD. That cameras originally seemed like an odd camera to recommend until I got it into my hands and took it on a vacation with my little cousin. Maybe the COMPASS will be perfect for someone… but who that is now I am not sure.

You can find out more and pre-order the COMPASS for £99.99 from Drift’s website Here